What is Clipping Path in InDesign?

A clipping path is a technique that is used to detect every sharp edge of an image and also to separate an object from its background. This technique has a great potential issue for every single design task in photoshop. A clipping path can be done with photo editing software like adobe photoshop CC, illustrator, CS, etc. but the clipping path in adobe InDesign makes the process fully easier than all of them. In other photoshop applications, when you go to make a clipping path, you would need to know about the usage of some tools at first. You might hear those tools called photoshop pen tool, magic wand tool, eraser the tool, etc. although you can’t use these tools unless you get enough knowledge and using skills to do that.

How to Make A Clipping Mask in InDesign?

Although, you can also use frame shapes to create a mask effect. To use the shape for masking, you should select the ‘Ellipse frame tool’ from the toolbar. When you select the tool, you get a circle frame that helps you to choose your object on the image. The process is like cropping but if you want an asymmetrical shape, you need to select the whole selection when moving. Now, find the ‘Cut’ option in the ‘Edit’ drop-down menu bar to separate your frame from the rest of the image, and then go to the ‘Edit’ option again and select the ‘Paste into’ option. There you have a circle clipping mask for your image. you can also use this technique with all other frame shapes like rectangle and polygon frame tools. 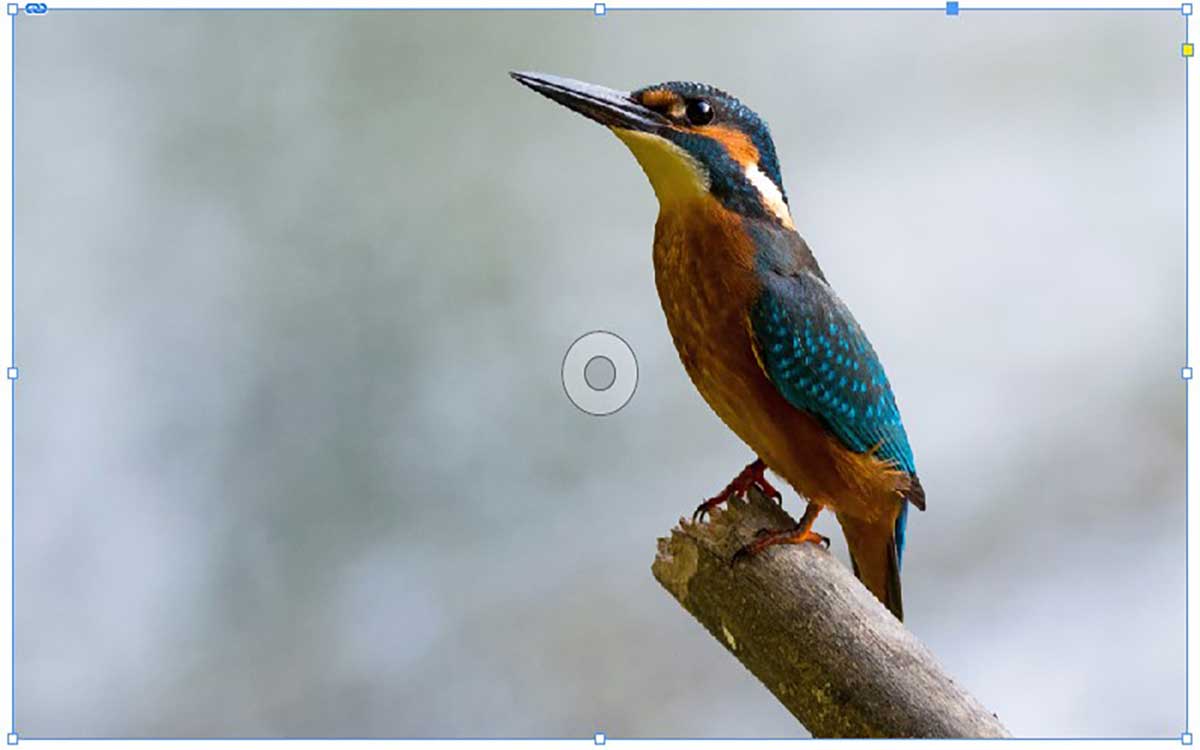 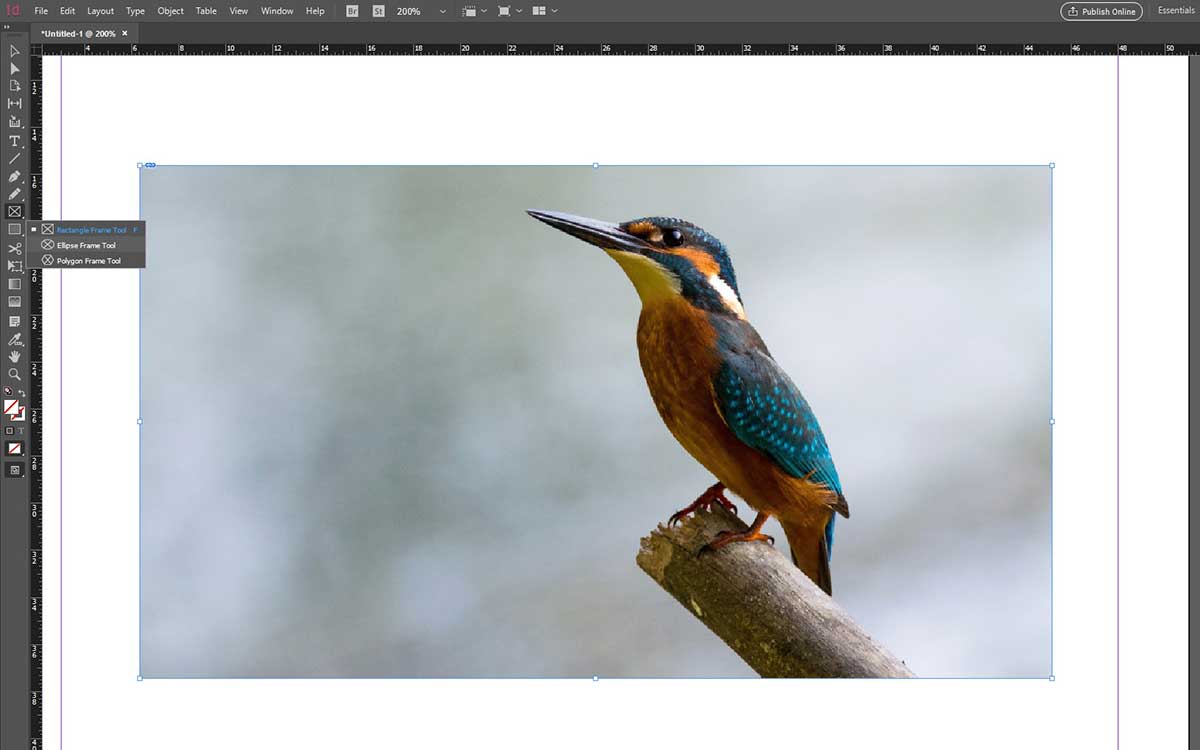 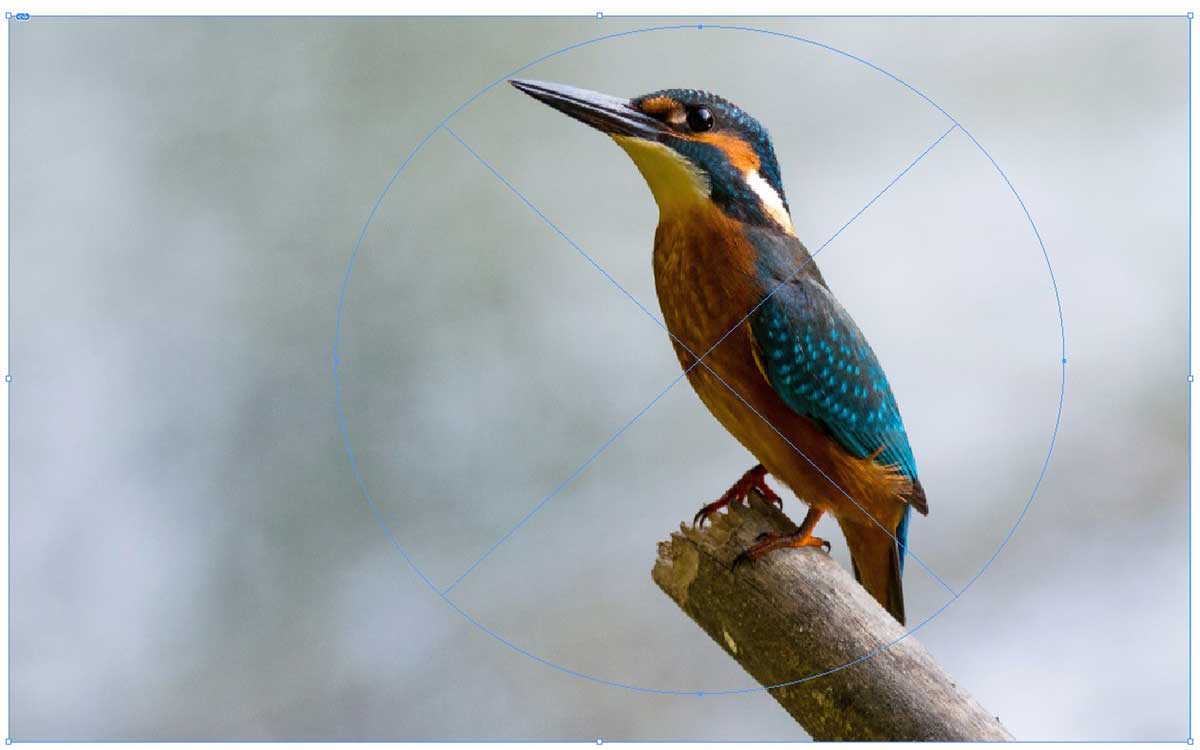 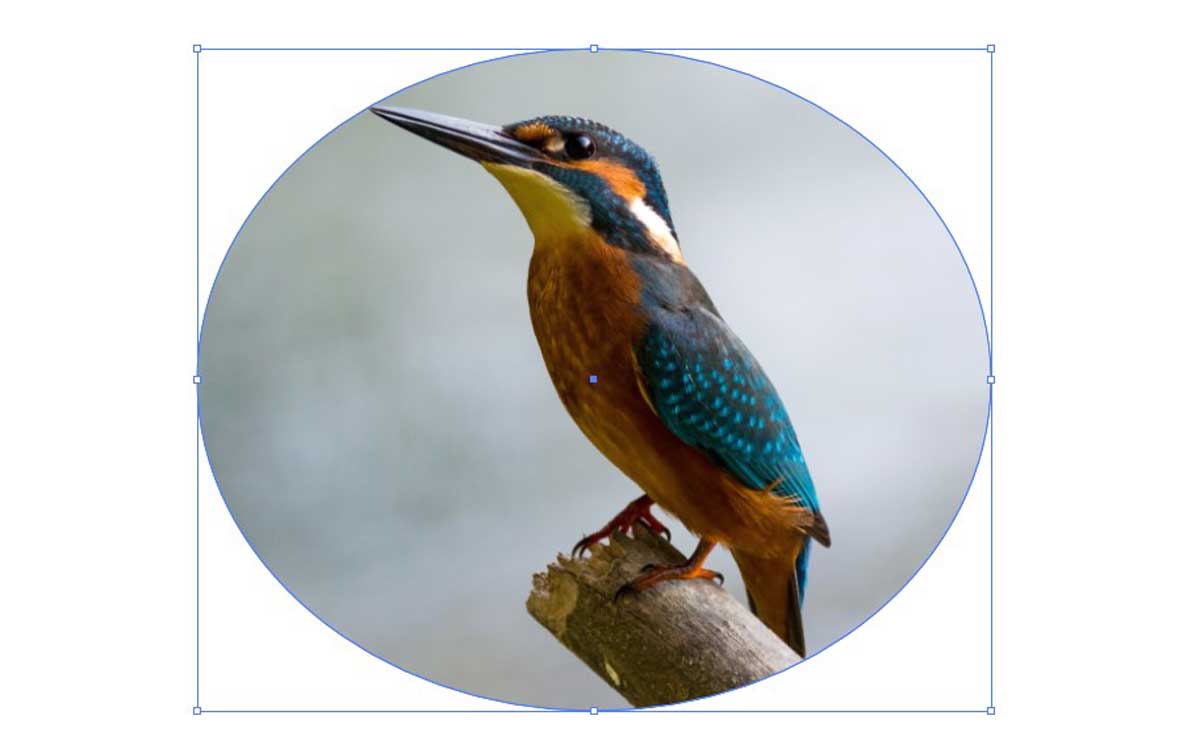 Now, we would go to make a clipping mask with customized shape frames that will be done by the pen tool. If you have used any photoshop software before, you might know about the pen tool. It works similar to other adobe software in InDesign. You can create any shapes using the pen tool, let's look at how to do that, The pen tool is useful for creating a complex clipping mask in InDesign as it helps to make any shapes like a pen drawing on the outline of any object.

First of all, you need to open the selected picture that you want to cut out any object from the rest of it, and then select the pen tool from the toolbar. With the image open and the pen tool selected, you should now pay attention to the outline around the object. Start the process by creating a single point in a convenient place in your image and continue it by following the outline of the object. 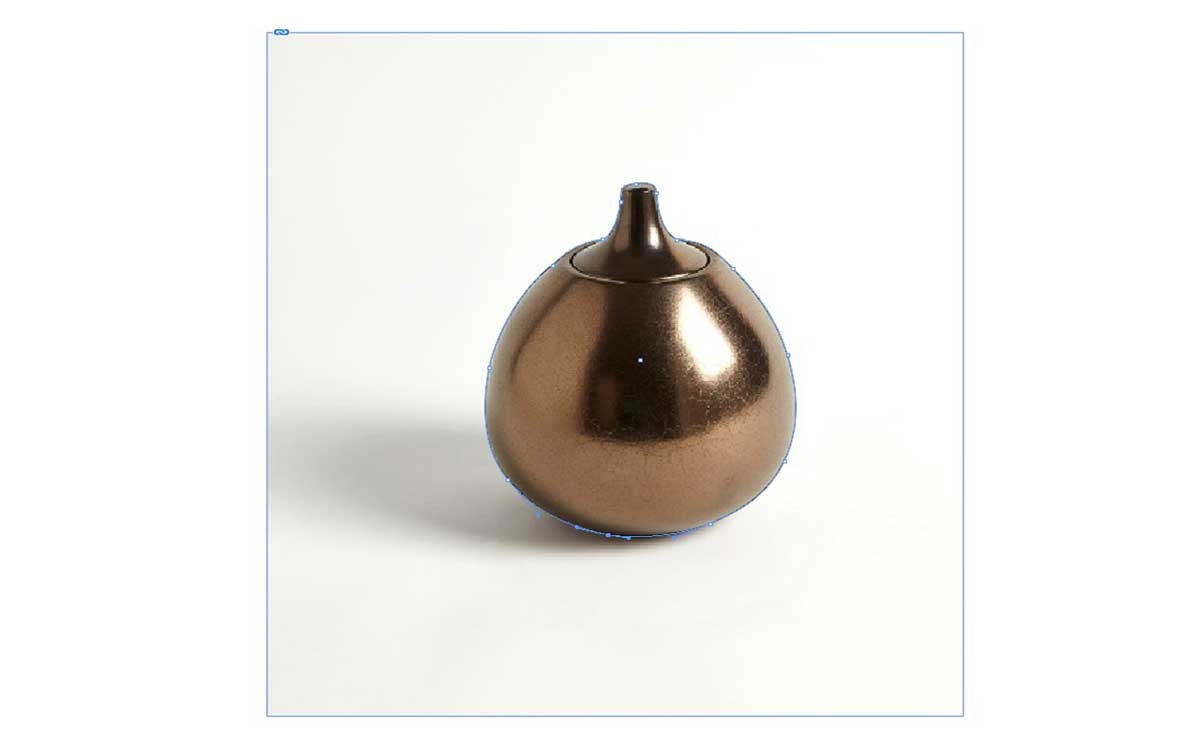 After completing the selection of the outline of your object, keep it as selected and then go to Edit>Cut it. 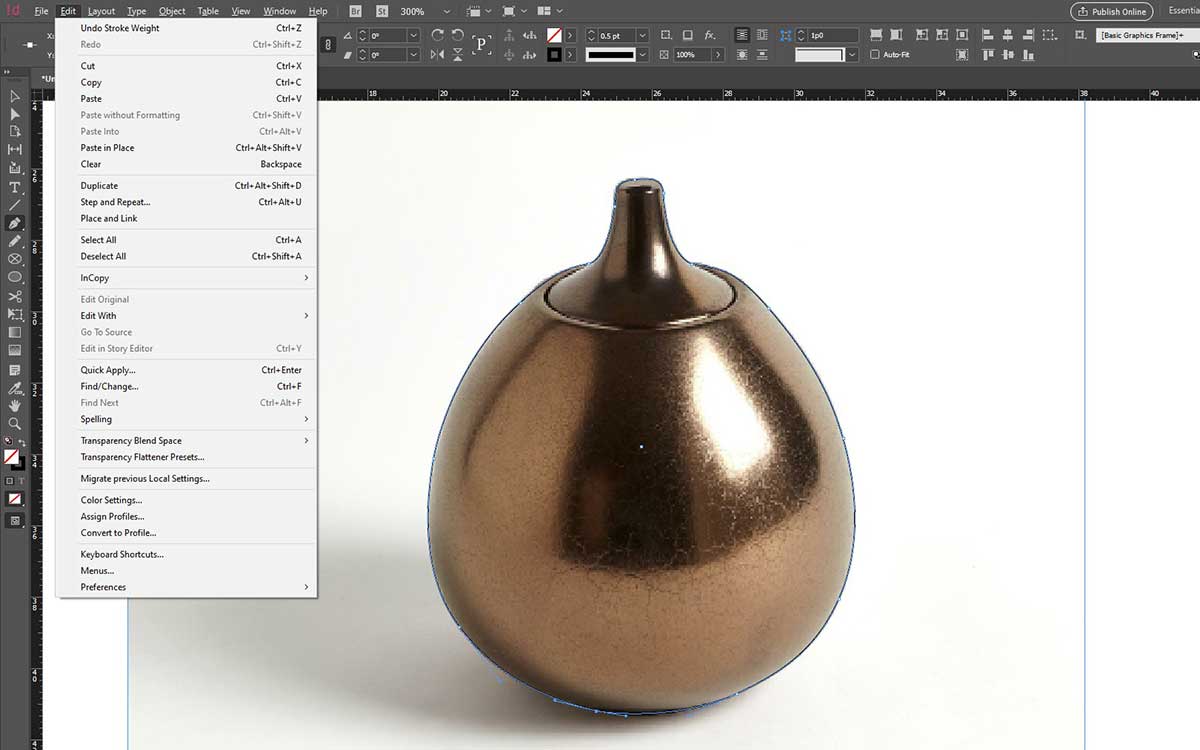 Now put the clipping object into the frame that you created by simply selecting the Paste option of the Edit menu.

How to Remove Background from An Image in InDesign?

It is pretty much easier to do the background removal from a picture with InDesign. As we have already learned two simple methods of creating a clipping mask, it would help us in our future lessons. You can isolate the background from an image by two simple methods. Among them, we would see the easiest one at first. It is called the automatically clipping path option. As previously said, InDesign makes the clipping path process easier than other software. So, let's get into the process,

You can also remove the background with the pen tool and the process is as similar as I stated above in Method-2. Keep following these instructions if you want to cut out any subject from your image. easy process.

How to Use the Image Over Text in InDesign?

Sometimes it needs to use an image over some text. Especially for covering up stories and briefing in magazines design and newspapers design, it needs most. So, how to do that with InDesign? To use the image over a text body, you should follow up steps given below,

How to Convert A Clipping Path to A-Frame with InDesign?

To convert a clipping path into a frame, you need to make a clipping path in an image. if you aren’t knowing the process of clipping path in InDesign, then check the technique from above. But there is quite a difference when you go to clip out a raster image. if you have one of them, then you go to Object > Clipping path > options. In the type menu, you will find an option that is an alpha channel for raster images. After selecting the alpha channel, you will see that you object with the clipping path outline. Once you get a clipping path around your subject, now it's time to turn it into a frame. To do that, you should click on the right button of your mouse in the selection area. A menu will be shown full of options from that, you would select ‘Convert clipping path to frame’. Boom, you have got a frame in the same shape as the clipping path. That’s some easy and short technique to get started with Adobe InDesign. If you find the article helpful to you, then let us know to give support to export more like them. Kennedy
I'm Kennedy, the photoshop expert of Graphic Design Eye. We know that color correction is a sensitive part of photoshop. I've shared all my experiences to help you out. I wish it will help you a lot.
Related Topics

Photo Editing
Oct 13,2022
Why is Color Correction Important in Photography?
In our everyday life, we used to capture photographs with our smartphones. We would then edit these photos so that they look perfect the

Photo Editing
Oct 13,2022
Your Photos, Your Right – Digital Footprints & The Law
Over the past few decades, the world has moved online. Business, entertainment, and socializing now all take place in the digital domain.

Photo Editing
Oct 13,2022
What is Raster and Vector Graphics?
Raster image and vector image are two different types of image files in graphic design. So, they are two simple but complex forms

Photo Editing
Oct 13,2022
How Much Clipping Path Does it Cost?
Welcome here for your quarry about How much clipping path does cost? However, we believe You have the idea about the profits of

Photo Editing
Oct 13,2022
How to Remove Background from Picture?
Removing background from the picture is a common keyword now especially in the field of online. It is also called a photo-cut-out

Photo Editing
Oct 13,2022
What is Photo Clipping Path in InDesign?
Clipping path is a technique that is used to detect every sharp edge of an image and also to separate an object to its background

Photo Editing
Oct 13,2022
What is the Color Correction in Photo Printing?
Color correction is an option that comes when you go to order with your massive photos to a photo lab for printing. Photo color correction

Photo Editing
Oct 13,2022
What is the Vector Line Drawing? – The Ultimate Guide
Drawing is a manual task that is used to give shape to whatever we imagine in our mind. from ancient times when language was not

Photo Editing
Oct 13,2022
What is an Image Resizing and Cropping?
Cropping and resizing are two fundamental steps of every image editing. These two options are used to make perfect shapes

Photo Editing
Oct 13,2022
What is Channel Masking in Photoshop?
Photoshop has so many great image editing options that are used widely to make images from simple to gorgeous. There are huge editing
Leave a Comment

Your email address will not be published. Required fields are marked*