What is a layer mask?

Adobe Photoshop is a great program with countless tools and techniques. The possibilities are almost endless with Photoshop. Among all those varieties, a layer mask is one of the fundamental tools in Photoshop. It offers advanced control over image transparency and is also used to hide and reveal any portions of an image. Layer and layer masks are two of the biggest advantages you find in Photoshop over any RAW editor. So, if you want to become an expert in Photoshop, understanding layer and layer masks is most crucial for you to achieve your goal.

Without a doubt, layers are the single most important aspect of Photoshop. Layers are highly used in the clipping path industry to separate different elements of an image. A layer can be compared to transparency on which imaging effects or images are applied and placed over or under an image. Without layers, nothing worth doing in Photoshop should be done. You can see their own Layers panel as well as their layer category in the Photoshop menu bar along the top of the screen. It reveals their importance in Photoshop. So, what exactly are layers, and why are these so important to understand?

A new image has a single layer. You work with layers in the layer panel. Layer groups help to organize and manage layers in Photoshop. Simply put, layers are images put on top of each other. When you add one layer on top of another, the top layer will be on the top of the ladder. Imagine you have a piece of paper and you paint it green. Then you take another piece of paper and paint a red circle on that and lay it over the red paper. After that, you take a piece of cellophane, write something yellow, and lay that on top of the yellow circle. Now you have a background (green) and two layers (red and yellow). Just like in the picture below-

What is a mask?

Since the original version of photoshop, layers are probably the single most important addition in it. But you simply don’t understand the power of photoshop until you thoroughly understand how and why to use the mask? It is a way to apply something to a very specific portion of an image. There are various types of masks available in the clipping path industry. Among them, clipping masks and layer masks are the primaries. Because of the concept, these are closely related but very different applications. Here is the brief description of those types given below-

This mask uses a layer to regulate the transparency or visibility of another layer. In other words, this technique is used to decide the transparency level of the other, where the upper layer borrows transparency from the bottom layer. Editors paint with black on the layer mask to make its pixels invisible, but they do the reverse using a clipping mask. If the layer beneath doesn’t have pixels at all, the pixels on the layer on the top of it will be invisible.

Layer masking allows you to hide or reveal any portion of an image. In this case, the mask is applied onto a layer for controlling the transparency level of different sections in one image without affecting its actual background remember, if you improve the opacity using the opacity slider from the layer panel, the whole image opacity will change. One of the best features of layer masking is, it will let you make any area entirely invisible or partly visible of an image.

Get the layer panel in photoshop 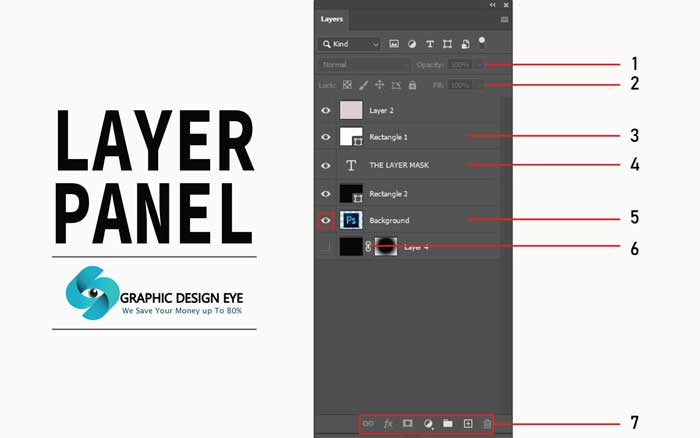 From the above discussion, we realize the importance of layer masks in photoshop. If we want to edit a simple portion of an image to adjust it with the whole photo then we must take the help of a layer mask in photoshop. With the help of a layer mask, we can hide or reveal any part of an image, control the transparency level of different sections, and can also improve opacity. Although it is a non-destructive photo editing process. But as a beginner, you may have to face some problems with it. So, before starting with it, you must have to introduce it with this photoshop tool. Just look at the picture-

Under the layer panel, there is also another toolbar containing different settings that can be applied to a layer

From the above discussion, we now have a clear concept of what layer masking is. Layer masking is the most effective technique to work with any portion of an image. You can turn a boring photograph into an eye-catching and interesting photo with the help of layer masking. With the help of a layer mask, you can easily isolate the desired image, create transparency, and change the background color of an image. It will also help you to create advertisements, magazine covers, product catalogs, and information brochures. It is said that the pen is more powerful than the sword but it is also apt to say that a perfect image is worth more than thousands of words. Make your images every part more meaningful and attractive with this Photoshop tool. Kennedy
I'm Kennedy, the photoshop expert of Graphic Design Eye. We know that color correction is a sensitive part of photoshop. I've shared all my experiences to help you out. I wish it will help you a lot.
Related Topics

Photo Editing
Aug 06,2022
Post Production Services – Best Post Production Specialist
Post-production is the addition of some processing job that is done to make a picture look wonderful. In another word, it is a process of photo editing with a bulk experiment and various types of editing processes

Photo Editing
Aug 06,2022
ECommerce Optimization Services – Website Product Optimize
The online eCommerce business is now so familiar to all of us. We are accustomed to buying whatever we need from an online store

Photo Editing
Aug 06,2022
Why is Color Correction Important in Photography?
In our everyday life, we used to capture photographs with our smartphones. We would then edit these photos so that they look perfect the

Photo Editing
Aug 06,2022
Your Photos, Your Right – Digital Footprints & The Law
Over the past few decades, the world has moved online. Business, entertainment, and socializing now all take place in the digital domain.

Photo Editing
Aug 06,2022
What is Background Remove From the Image?
Background removal is a popular service among all graphic design services nowadays. It is used to remove background from the

Photo Editing
Aug 06,2022
Amazon Product Background Removal Service
Photo editing is one of the most necessary nowadays. We used to edit photos whenever we took a photo whether it is a social media

Photo Editing
Aug 06,2022
What is Raster and Vector Graphics?
Raster image and vector image are two different types of image files in graphic design. So, they are two simple but complex forms

Photo Editing
Aug 06,2022
How Much Clipping Path Does it Cost?
Welcome here for your quarry about How much clipping path does cost? However, we believe You have the idea about the profits of

Photo Editing
Aug 06,2022
What is Car Business Photo Editing?
Car photo editing service is one of the most important services among all clipping path services. Now it is the best professional